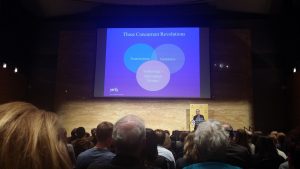 Dr Yang attended the Lecture Science and Technology: New Frontiers for Helping Peoplewith Mental Illness at UNSW on 19 September 2016, which was present by Thomas Roland Inselm, the world-class neuroscientist and psychiatrist.

Dr Thomas Inselm led the National Institute of Mental Health (NIMH) in USA from 2002 until November 2015. He is best known for research on oxytocin and vasopressin, two peptide hormones implicated in complex social behaviors, such as parental care and attachment.

In 2015 Thomas Inselm became a leader of the Google Life Sciences division,an independent company under the tech giant’s Alphabet umbrella. He joined Alphabet to give Silicon Valley a try.

Insel foresaw the tech sector as the answer to detecting, diagnosing, and treating mental illness.